Why is Coaching One of the Most Powerful Tools for Leaders?

We live in an age where everyone either is a coach or is being coached (or both!). But what does it really mean to be a coach? And what does being coachable look like?

Coaching has become a core component of the way modern leaders approach working with their teams and has even become an integral part of how businesses operate. In fact, one of the most sought-after skills for executives and front-line managers alike is coaching. Almost every leadership job posting, especially in sales, has the word “coach” in it. Managers and executives are now expected to include coaching as a part of their leadership skills, and individual contributors who are looking to excel and grow in their careers can expect to be coached as they advance up the corporate ladder. But do your leaders really know what coaching is?

Coaching is a powerful tool leaders can use to encourage employee engagement and improve performance, especially in high-pressure industries. It allows for immediate behavior changes in employees and increased productivity for companies. Sir John Whitmore, a pioneer of coaching in business defined coaching’s role as

“Unlocking people’s potential to maximize their own performance.”

It’s a way to both encourage a better performance while empowering the coachee to take matters into their own hands. And as the health of modern team dynamics and culture is measured in engagement, it’s no surprise that the primary factors that lead to increased employee engagement are those directly linked to coaching.

Factors such as collaboratively establishing performance goals, collectively setting expectations of excellence and striving for peak performance, and focusing on developing the individualized strengths of employees are areas of focus for coaching sessions that have big impacts on engagement. Through coaching, you can define what good looks like at your company and help your leaders to reinforce those behaviors.

We know coaching is a powerful leadership tool, but what does it actually mean to be a coach to your team? Coaching isn’t just one-on-one, individualized managing. It also isn’t just instructing, teaching, or directing someone what to do. Managers also need these leadership tools, but coaching presents a unique opportunity for growth for both the coach and the coachee.

Listening is one of the most powerful tools a coach can have. Just giving your employees the space to have their voices heard can increase feelings of engagement and can make them less vulnerable to stress. According to a Salesforce report, employees who feel that their voice is heard are 4.6 times more likely to feel empowered to do their best work. Employees who feel heard are more likely to stay at a company, increasing employee retention, which impacts both the dynamic and culture of the team but also the bottom line. That listening is a major coaching skill can sometimes come as a surprise, as many people assume that coaching is a mechanism to impart wisdom to less senior employees. But actively listening to what your employees are saying helps build connections and can give you insight and information into what motivates your employees, what challenges they might face, and builds trust.

If you think about running a sales call, it’s no different. From analyzing countless sales calls recorded, Gong has reported that the best salespeople talk for 46% of their calls. That means the remaining 54% of the call is spent listening!

Think about one of your last coaching sessions. As the coach, if you were talking 80% of the time, you might be doing it wrong. As a leader, you are constantly in the “discovery phase'' trying to understand how to help your team reach its potential. You can’t do discovery if you’re only giving advice and talking about what you would do.

Learning how to effectively give feedback without causing the other person to get defensive is a highly valuable coaching skill as a leader. The ability to give and receive feedback is a cornerstone of being a good coach and a high-performer, as without feedback it’s difficult to know where your areas of improvement are and where your talents lie. Paramount to being able to deliver feedback well is establishing trust. Keeping in mind that feedback is just information and that delivering feedback should be the starting point of the conversation, not the end, will help frame the dialogue and set the tone for a positive feedback environment. Asking for feedback in return from your team reinforces the culture of giving and receiving feedback while providing an opportunity to model the positive consequences of receiving and implementing feedback. Give and receive!

3. Let the coachee arrive at their own solution

It can be tempting, and sometimes easier, to simply tell your employees what to do. But there is no opportunity for growth and development when teams are simply carrying out orders from their boss. Additionally, assuming you as the manager have all the right presumptions and ideas limits the potential of your team and creates an unhealthy dynamic, ripe for disengagement. Instead, let your employees arrive at their own solutions. Humans are fundamentally oriented toward figuring things out on their own and thrive in environments where they can learn and grow by doing.

Think of it this way: you hired or entrusted these people with important, impactful jobs, so it follows that their ideas and solutions should be valued. Offering people the opportunity to solve problems on their own and execute an idea they came up with will result in a feeling of ownership and empowerment. We are all primed to be more invested in the outcomes of our own ideas. It is the coaching manager’s job to get out of the way and let your employees try (and maybe fail).

And sometimes people just need to talk it out. Think about a call with a prospect—problems are often presented but most of the time they are surface-level issues. Asking impactful questions and giving the person space to talk through their concern is what peels back the layers of the onion. Take the same approach with your coachee. Help them to talk through different scenarios and let them explore the options with your guidance.

One of the prime differences between coaching and counseling is that coaching is a solution-focused approach. Olympic fencer and Valor Coach Iris Zimmermann often asks her clients “What is possible?”. While spending time to reflect is a critical part of coaching and self-improvement, it’s identifying where you can take an action, try out something that worked before or might work this time, or come up with a completely different approach that is in service of maximizing or improving performance. It can be discouraging and demotivating to focus only on what went wrong without identifying what went right, where you can make a change, and what is possible.

These days we are surrounded by feedback—everywhere: social media, your sales dashboard, productivity trackers, constant surveys, hard conversations, etc. Coaching can help break through the noise and make sense of all the voices, data, and information you’re receiving. Don’t add to the noise, remove it by being the coach your team needs.

Why Coaching and Leadership Go Hand-in-Hand 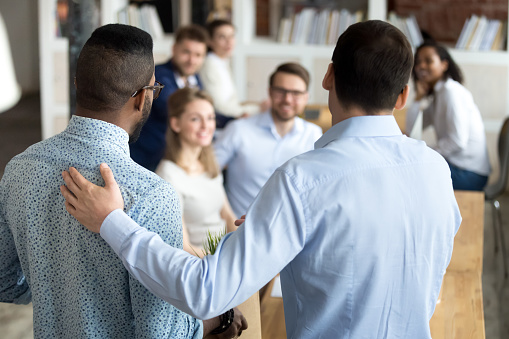 Coaching in the Workplace